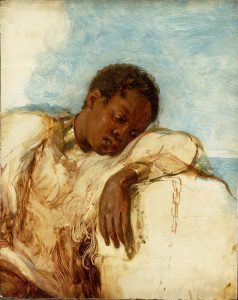 Slavery in early sub-Saharan Africa took a variety of forms. While most slaves were field workers, some served in royal courts as officials, soldiers, servants and artisans.

Hereditary slavery, extending over several generations, was rare. Under a system known as ‘pawnship’, young people (usually girls) acted as collateral for their family’s debts. If their parents or kin defaulted on these debts, the girls were forced to work to pay them off. In many instances, they eventually married into their owner’s lineage and their own family’s debt was cancelled.

This system differed from the chattle slavery that developed in the Americas. People were not enslaved because of their ethnicity or culture. It was not about being inferior or having less worth than another person. However, this changed when slave markets were developed as Arabs and Europeans became the main buyers. The transatlantic trade was a demand-driven market, a system that was motivated by commercial incentives.

Africans became enslaved within the transatlantic trade mainly in one of four ways:

Many of them were kidnapped from their villages. Alexander Falconbridge<link to case study 05b> (died 1792), a ship’s surgeon on a number of slaving voyages, wrote that ‘a man and his son, according to their own information, were seized by professed kidnappers while they were planting yams.’ Ottobah Cuguano described his own capture in what is now Ghana in this way:

Several great ruffians came upon us suddenly, and said we had committed a great fault against their lord … some of us attempted in vain to run away, but pistols or cutlasses were introduced, threatening that, if we offered to stir, we should all lie dead on the spot.

The captured Africans were marched to the Atlantic coast where they would be exchanged for goods such as muskets, cloth and alcohol. During this march, they would be bound together at the neck in what was known as a ‘coffle’, in twos or threes or in lines of as many as 30 or 40 individuals.

Enslavement became a major by-product of war in Africa as different societies expanded through military conflicts. In many cases, one side would be deliberately sponsored by a European nation – it would choose a favourite side to win between two African societies at war and supply that side with guns. The victorious side rounded up captives from the other side, who were given to the Europeans to pay for the arms and exchanged for more guns or other barter.

These particular captives were often used in slave raids. They often held grudges against the groups they were ordered to raid, having previously been sold into slavery themselves by them in inter-African territorial wars. This deliberately created chaos ensured the continuation of slaving activities.

Some African societies, such as Benin in southern Nigeria, refused to sell slaves. Others, like Dahomey (now the modern nation also called Benin), appear to have specialised in enslavement. Drought, famine or periods of violent conflict might cause a ruler or a merchant to sell slaves. In addition, many rulers sold slaves to acquire the trade goods – textiles, alcohol and other rare imports – that were necessary to secure the loyalty of their subjects.

The loss of population in Africa as a result of the transatlantic trade had a devastating effect on local community and national life, disrupting economic and financial order, agricultural production, political organisation and the social and psychological well-being of its inhabitants.