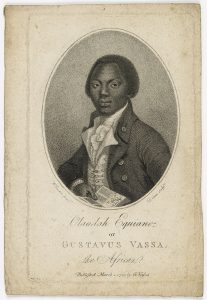 There are a number of eye-witness accounts of the horrors of the transatlantic slave trade and the infamous Atlantic crossing, the voyage across the Atlantic that could take as long as two months.

There are, however, relatively few accounts by Africans, and of these the most famous is Olaudah Equiano’s Interesting Narrative, first published in London in 1789.

It is believed that Equiano was born an Igbo in about 1745 in what is today the south-eastern part of Nigeria. In his autobiography, he describes how as a child he was kidnapped with his sister while they were alone at home, then how they were separated from each other and his experience of several African owners while on his way to the coast.

He contrasts the relatively benign nature of his experience of slavery in Africa with the treatment he experienced on board the slave ship, where he feared that he was about to be eaten by the European crew:

The white people looked and acted, as I thought, in so savage a manner; for I had never seen among any people such instances of brutal cruelty; and this not only shown towards us Blacks, but also to some of the Whites themselves.

One of his most famous descriptions is of the scene below the ship’s deck:

The stench of the hold while we were on the coast was so intolerably loathsome, that it was dangerous to remain there for any time, and some of us had been permitted to stay on the deck for the fresh air; but now that the whole ship’s cargo were confined together, it became absolutely pestilential. The closeness of the place, and the heat of the climate, added to the number in the ship, which was so crowded that each had scarcely room to turn himself, almost suffocated us. This produced copious perspirations, so that the air soon became unfit for respiration, from a variety of loathsome smells, and brought on a sickness among the slaves, of which many died, thus falling victims to the improvident avarice, as I may call it, of their purchasers. This wretched situation was again aggravated by the galling of the chains, now become insupportable; and the filth of the necessary tubs, into which the children often fell, and were almost suffocated. The shrieks of the women, and the groans of the dying, rendered the whole a scene of horror almost inconceivable.

I was soon put down under the decks, and there I received such a salutation in my nostrils as I had never experienced in my life: so that, with the loathsomeness of the stench and crying together, I became so sick and low that I was not able to eat. I now wished for the last friend, death, to relieve me; but soon, to my grief, two of the White men offered me eatables; and on my refusing to eat, one of them held me fast by the hands, and laid me across I think the windlass, and tied my feet, while the other flogged me severely.

I had never experienced any thing of this kind before; and although not being used to the water, I naturally feared that element the first time I saw it, yet nevertheless, could I have got over the nettings, I would have jumped over the side, but I could not; and besides, the crew used to watch us very closely who were not chained down to the decks, lest we should leap into the water: and I have seen some of these poor African prisoners most severely cut for attempting to do so, and hourly whipped for not eating.

For more about Olaudah Equiano, see The Campaign for Abolition and artefacts

‘All the oldest died of thirst’

Ali Eisami was an enslaved Kanuri man from what is today northern Nigeria. Born around 1780, his Narrative tells of his enslavement and the start of his transportation across the Atlantic in 1818, 11 years after the abolition of the slave trade. He never reached the Americas but was captured at sea by the British navy and taken to Sierra Leone where he was freed. His recollections of his treatment are similar to those of Africans received on board a slave ship:

The people of the great vessel were wicked: when we had been shipped, they took away all the small pieces of cloth which were on our bodies, and threw them into the water, then they took chains and fettered two together. We in the vessel, young and old, were seven hundred, whom the White men had bought. We were all fettered round our feet, and all the oldest died of thirst, for there was no water. Every morning they had to take many, and throw them into the water.

As well as being chained together, enslaved Africans were tightly packed into the holds of slave ships with barely room to move or air to breathe (see Capture and enslavement<link to case study 05a>).

‘Many of the most mutinous leapt overboard’

As can be seen from Equiano’s account, it was not uncommon for captives to jump overboard and drown themselves rather than endure transportation and a life of slavery. During many voyages, however, the enslaved rebelled and attacked their captors.

One of the most well-known eyewitness accounts of such a rebellion is that by John Casseneuve, first mate aboard the London slave ship Don Carlos. He recounts how, on a voyage in 1700, the African captives managed to arm themselves with various weapons and, to free themselves, attacked the crew:

Thus arm’d, they fell in crouds and parcels on our men, upon the deck unawares, and stabbed one of the stoutest of us all, who receiv’d fourteen or fifteen wounds of their knives, and so expir’d. Next they assaulted our boatswain, and cut one of his legs so round the bone, that he could not move, the nerves being cut through; others cut our cooks throat to the pipe, and others wounded three of the sailors, and threw one of them overboard in that condition, from the forecastle into the sea.

On this occasion, the rebellion was equally violently suppressed. But Casseneuve adds that, even in defeat, the Africans still resisted:

‘Many of the most mutinous leapt overboard and drown’d themselves in the ocean with such resolution, shewing no manner of concern for life.’

Such rebellions were common: one historian has estimated that, in the 18th century, there was on average one a month. On a few occasions, Africans even took control of ships and attempted to sail back to Africa.

‘Guilty of such brutal excesses as disgrace human nature’

Millions survived the Atlantic crossing but many millions of Africans did not. Alexander Falconbridge (died 1792), a surgeon on several slave ships in the 18th century and later an abolitionist and governor of Sierra Leone, concludes that:

The hardships and inconveniences suffered by the Negroes during the passage are scarcely to be enumerated or conceived. They are far more violently affected by the seasickness than the Europeans. It frequently terminates in death, especially among the women.

On board some ships, the common sailors are allowed to have intercourse with such of the Black women whose consent they can procure. And some of them have been known to take the inconstancy of their paramours so much to heart, as to leap overboard and drown themselves. The officers are permitted to indulge their passions among them at pleasure, and sometimes are guilty of such brutal excesses as disgrace human nature.