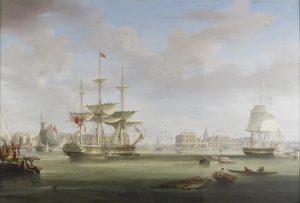 Although London would eventually be eclipsed by Bristol and Liverpool as a slave-trading port, its involvement in the trade was both longer and more complex than that of the other two cities.

Until 1698, London had enjoyed the commercial privileges bestowed on it by the charter of the Royal African Company, and the City and its officials had prospered on its revenues. Under this monopoly, 100,000 Africans had been forcibly transported to the Americas and the Caribbean and 30,000 tons of sugar had been imported. Between 1660 and 1690, 15 lord mayors, 25 sheriffs and 38 aldermen of the City of London were shareholders in the company.

After the 1700s, following its decline as the most active slaving port, London assumed a more permanent and central role as the financial hub of the ‘triangular trade’. Because slave ship voyages were both risky and long, new forms of credit were introduced to the British banking system. The need for long-term credit, with bills payable from one-and-a-half to three years, led to the development of specialist banking houses such as that operated by Alexander and David Barclay, whose bank bears the family name to this day. Even more active in this field was Sir Francis Baring, who was reputed to have made his initial fortune as a 16-year-old slave dealer.

Pulling the strings of all parties in this business was the enormously influential body of planters and their representatives who sat in the House of Commons. In 1766, a contributor to the Gentleman’s Magazine estimated:

… there are now in Parliament upwards of 40 members who are either West India planters themselves, descended from such, or have concerns there that entitle them to this pre-eminence.

By 1830, there were around 750,000 enslaved Africans in the British Caribbean working about 3,000 hours a year – that’s a total of 3 billion hours of free labour producing sugar, coffee and cotton. The population of England at the time was only 5 million.

Even towards the end of the slave trade, London was still a major player in the trafficking of African human lives across the Atlantic. Between 1802 and 1807, almost 25,000 Africans were transported to the Americas in 77 ships that initially left from West India Docks.